Google Transliteration: I chat in my language but use English letters!

Writing Urdu (major language of Pakistan/India) on PC requires good amount of effort if you are new to it. The keyboards are mainly designed for English and Urdu is handled as a secondary script. That’s the reason why we don’t see much content on Urdu over internet, despite of many different tools and huge development in Arabic script fonts.

Google recently came in to business and launched “Transliteration” services. Transliteration means changing of script from one system to the other, followed by rules specific to the script.

Treat this tool just as you chat in your own language but use English letters. For example instead of writing “My name is Hamza” we write “Mera naam hamza hai“. So with this tool whenever you writer mera naam hamza hai it will convert it into Urdu. Currently the tool is available for 10 other languages. 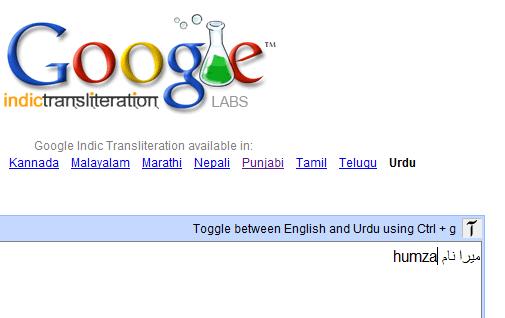 Now many chat problems will be solved when people use their own language to communicate but uses English letters. This tool will be beneficial for them as well as for Urdu writers. Right now, Google Transliteration is in experimental stages and will get better by the user feedback.  For more detailed help visit About Indic Transliteration or Give it a try