Google releases Maps for iOS 6 and iPhone 5, brings back turn by turn navigation and directions

The wait is over for the iOS users as Google has finally released Google maps on schedule and as promised. It was surprising to see that Apple ditched Google Maps, which are the best source and the most reliable for navigation for it’s home brewed solution i.e. Apple maps. Apple maps have received a lot of criticism lately which even led to firing of it’s developer from Apple itself, the apple maps had even been criticised by the Australian police for it’s  unreliability.

So, readers must be wondering if Google has retained the stability and functionality from it’s earlier versions; to put it this way, Google maps will offer turn by turn navigation, directions, street view and imagery with public transport option as well. As with all other applications, you can view the maps in different style ranging from terrain to satellite imagery. here is a look at what the Google Maps actually look like: 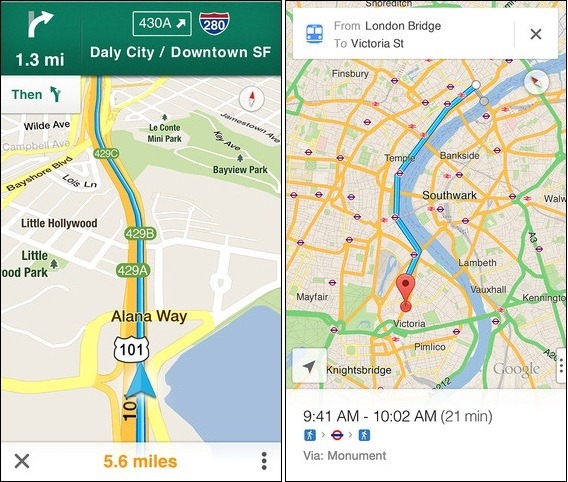 Looks brilliant i say, they have given it a huge cosmetic overhaul but that really was expected. It is really good to see Google Maps back on the platform where it actually gained popularity (smartphones). The maps are available to download for free on Apple store, however, they are only avilable for iPhone and iPod while the iPad remains in the waiting list.