The Nexus range keeps on expanding with the addition of the Google Nexus Q. The Nexus Q is a highly polished streaming device Google released for the android Jellybean OS. Only two devices currently support Android’s 4.1 OS, they are the Galaxy Nexus and Google Nexus 7. Coming into streamline with only a few devices to support is a big risk by Google, a part from that not all ICS supporting devices will be notched up to Jellybean operating system.

This matt finished black ball is indeed the Nexus Q. To be honest the design is and I apologize for using this word “awesome”. It seems as though that Google are aiming at “minimalistic” designs and we don’t mind that at all. Luminous ring accompanies the design and it lights up as the device gets connected. That’s all from the front, now let’s analyze the back. 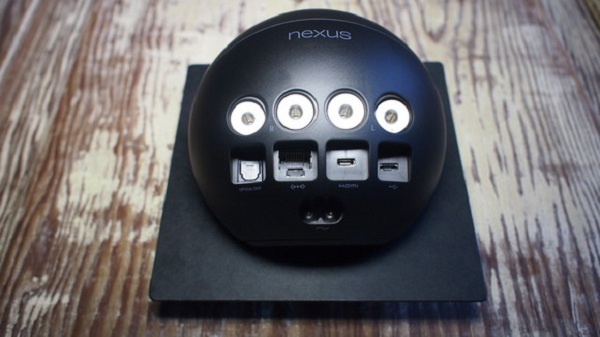 This is where all the connections happen. For direct connection an HDMI link is provided, will there are numerous slots for other devices to connect. Again, Google has done it quiet “neatly” and it does feel like a high end device.

As we have already mentioned that Nexus Q will require you to have Android’s latest operating system running. Apart from that to make sure it remains exclusive for the Jellybean and rest to come, Google requires you to download a Nexus Q App from play store, it will offer its services as a communication bridge. HDMI interface will guide your streamed media onto the connected device.

The Nexus Q is available from the play store at $299 apiece. From our point of view it is slightly over priced and sales might not pick up due to the fact of exclusivity to jellybean and its limitations. So we can only ask ourselves if the price is justifiable.