Get your windows 8 from MSDN and TechNet, free 90 day trial

Release data is coming closer, 26th October the date to remember. However it seems that you can taste the final version of Windows yourself if you are registered at MSDN or TechNet. Windows 8 is pretty big deal because it is set to replace the most popular version of windows after windows XP. It would take time for it to set it roots but we think it’s a step towards the right direction. 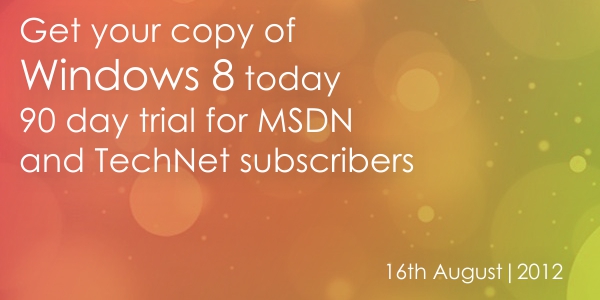 Aiming at tablets; windows 8 is a fresh breath of air after kingship by Apple and Android in the tablet market, hopefully Windows 8 will change the tablet statistics and balance out tablet saturation which is currently dominated by Apple at 68% of tablet share. The birth of Windows 8 wasn’t easy, it went through three stages before it could be ready (consumer preview, developer preview an release) and the recent drama involving “copyrights” on the word “metro” for which Microsoft released a whole new built.

If you have been using the old version of Windows 8 then be ready to see some changes; changes like the word “metro” being changed and removed and other minor tweaks. So – if you are subscribed to MSDN or TechNet, Go ahead and try out the 90 day trial; if you are already on windows 8 then share your experience through comments below, have you liked the transition? Do you think it is a good move by Microsoft to replace “desktop” by Windows 8 interface? Share it all.