Carbon Nanotubes – Chips will be Much Smaller

1/10,000th of a human hair in diameter, stronger than steel and tougher than diamond; the carbon nanotubes open a bright future for small sized, powerful computer chips.

Scienstists from MIT have worked on a solution, that uses entirely different technology to connect different transistors in computer chips, known as carbon nanotubes. These tubes are famous among scientist for their sheer strength and thoughness. They are stronger than steel (comparatively) and tougher than diamond. The tubes have very less diameter compared to traditional copper wires used in chips and as the connection count reaches millions, it generates huge difference in size.

Building block of computer chips is transistor, the processor in your PC has millions of transistor in it. Traditionally these transistors are connected via carbon wire; just like those in electronic circuits but thinner. To achieve high performance on a smaller size these wires have been shrunked over years to pack more in less space. However there is a certain limit after which the conductivity suffers and may fail entirely after that threashold. 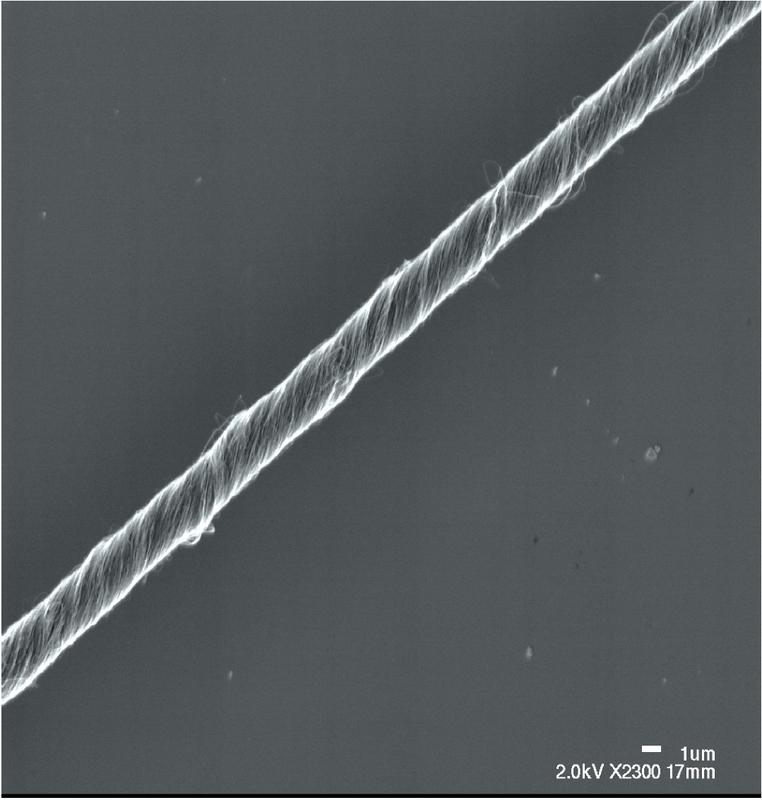 Professor Carl V. Thompson from MIT has been able to manufacture such carbon nanotubes that are perfect for vertical connections between transistors and can replace the old fashioned copper wires to make computer chip smaller and more robust. The heavily sponsored research proved to be successful as previous attempts were a bit failure to grow these nanotubes on metallic surface at temperature close to computer chip manufacutring temperature. Those geeks who want insights should read this paper

The research hasn’t ended here, they are looking into different combination of materials to further improve the quality and characteristics of these tubes. This news was released officially on September 10, 2009 i.e yesterday, however the research result is at least a month old. Let’s see if the engineers claim to release the final version of these tubes that can accept the challenge to go into computer chips.

How to make carbon nanotubes:

An article on MIT research news explains the exact procedure how the engineers were able to make the require carbon nanotubes:

In a vacuum chamber, the researchers vaporized the metals tantalum and iron, which settled in layers on a silicon wafer. Then they placed the coated wafer at one end of a quartz tube, which was inserted into a furnace. At the wafer’s end of the tube, the furnace temperature was 475 degrees C; but at the opposite end, the temperature varied. The researchers pumped ethylene gas into the tube from the end opposite the wafer. When the temperature at that end approached 800 degrees, the ethylene decomposed, and the iron on the wafer catalyzed the formation of carbon nanotubes.

Carbon nanotube is a hot research topic these days as it offers its application in so many things. As the research continues it reveals its possible application in the fields of biology, military, commercial use and engineering. 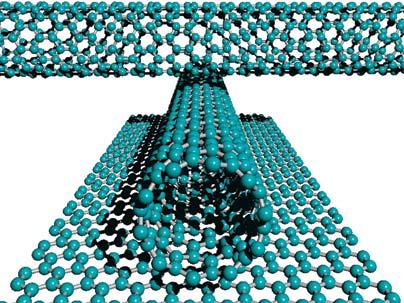 MIT reasearch on nanotube's exceptional ability to conduct electricity. Some moleclues can attach themselves to carbon nanotues without distrubing the tubes structural integrity - Image: Marzari Lab

MIT research shows a carbon naotube heat sink concept where the heat source is in center (red) which dissipates to sorrounding via tubes - Image: Markus Buehler 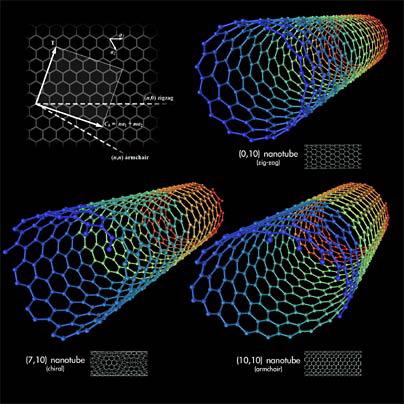 Nanotubes can be used as capacitor, MIT call it ultracapacitor - Image: Michael Strck

It seems MIT’s has diverged its major research on nanotubes. The above mentioned innovations are really cool for example the heat sink will make it possible to dissipate heat from micro devices without using conventional steel heat sink thus reduces the size. There’s been also some research to cure cancer by sucking the faulty cells using these nanotubes. There future is bright!