Blackberry 10 launch is just a few months away and information of its new device is floating around on the internet. If the information is correct then the next blackberry will be dubbed “Aristo” (Greek for the best). If this phone really is in the pipeline than its going to generate a lot of buzz. 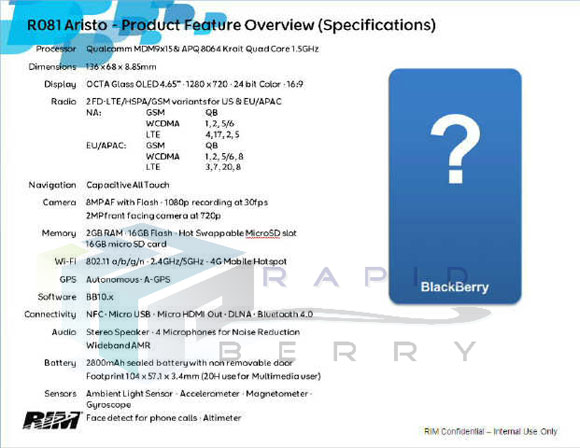 According to leaked information, Aristo will feature a QUALCOMM APQ8064 quad-core Krait processor which is clocked at 1.5 GHz, a 2GB RAM will further boost the specifications. The next generation blackberry device will also feature a 4.65 inch OLED HD display boasting a resolution of 1280 x 720. The screen is said to be made by Samsung and uses OCTA glass which reduces the thickness of the device to just 8.85mm.

Connectivity is going to sport NFC, WiFi, DLNA, Bluetooth 4.0 and LTE as well, summing up the specifications, it matches up with the notorious Optimus G by LG, however the operating System is going to be the defining term for blackberry, they must come up with something truly extra ordinary to challenge android and iOS devices.

Is this going to be enough to break the bad spell blackberry is going through, or is it just another phase they have to pass before they let go of Blackberry OS. Only time will tell if the can recover.