Barnes & Noble rolls out an update for the Nook Color

The B&N Tablet gained more popularity when people started hacking into the system to download Android onto the $250 device to make it an Android tablet for beginners, but now Barnes & Noble has released an official update for the Nook Color that adds lots of new functions to the device making it much more than just an e-reader.Nook Apps will use the Android platform for making new Apps but will have to be customized for optimum performance on the device. 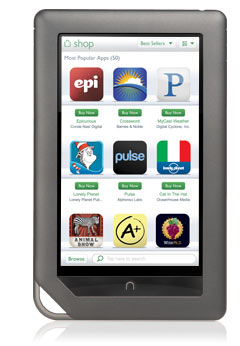 Not only does it feature Nook Apps and Nook Email but the Web browsing experience on this 7-inch device has also been over hauled, it now supports Flash on its browser which means you get rich content while surfing the web.

A few Nook Apps worth mentioning include Epicurious, UNO, Quickviewoffice, Lonely Planet, Angry birds and Pandora internet Radio.Theres also a new Social netwroking app  called “Nook friends” which allows you to see what your friends are reading.Furthermore, new animations for page turning etc on the e-reader have also been introduced in addition to better integration of text and multimedia for kid’s Nook books.

B&N says the the update will be available to Wi-Fi connected device starting today, instead of waiting, you can download it today by visiting the Nook Color update page.