According to our sources, Apple will begin the pre order routine for their upcoming alleged iPhone 5. The news suggests that you can “pre-order” your next iDevice as soon as September 12, we are hoping to see big changes in the next iPhone and the launch date is tempting enough for you to hold back your smartphone desire a little to see what Apple brings us. 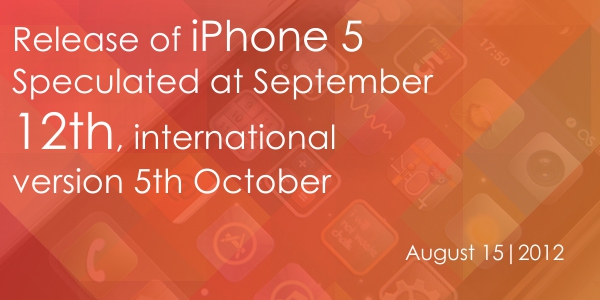 As far as international users are concerned, they will start shipping worldwide by October 5th 2012. We can assure there is going to be a new iPhone considering the amount of leaked hardware popping around the world. The alleged iPhone is rumored to have a bigger screen, a smaller connecting dock, enhanced wireless abilities (thanks to two network interfaces), a better camera, new design, will run iOS 6, will have 4G LTE and a better display than what we have seen in the iPhone 4s.

Interestingly this is the first time that Apple is (might) going to release the iPhone on the launch date, previously the iDevices i.e. iPhone, iPad and iPod’s were released “After” the official announcement. I guess we won’t have to wait long to see if they really are going to change their strategy.