This can’t get any better, new gadget almost every day. The latest from Apple is that they are seeking patent to design a highly advance smart cover which will also act as a secondary screen. We think of it what the keyboard had for Microsoft Surface this smart cover would be for the iPad. If it really comes off the production line it is going to be a hit, but a sneaky suspicion that it’s not going to be cheap. 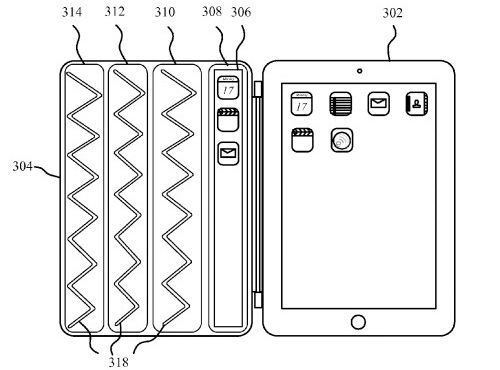 There are several concepts of the device floating around defining very different functions, a few suggest that it would work exactly like the capacitive keyboard designed for Microsoft surface, while some are suggesting a device capable of much more than that.
From the concept designs we can see that the cover will be connected through the device magnetically and that would be the communication port as well. Presumably this hyper advance smart cover will offer much functionality, when folded to make a stand it would display content information.

When used as a cover, it will display notifications and reminders. That’s handy, I mean I hate to unlock the device and see no notification, sad but true.

Another design shows off how it will communicate with the main device itself, it could be used a versatile drawing device as well.

We aren’t really sure if it will ever come to life, but it is an amazing concept and will complement the functionalities of the iPad perfectly. The features suggested by the designs are tempting and we look forward to see this being made. Share your views about the designs and what to you think about this move by Apple.