If you are looking to get your contract renewed or planning to buy a new phone then you must be in a pickle – wondering which phone to buy. Apple released their iPhone 5 this month and Nokia brought us their Lumia 920, people always prefer Apple products and they sell like hot cakes – but, can Apple take the leap? Are the hardware specifications good enough to challenge Lumia 920? 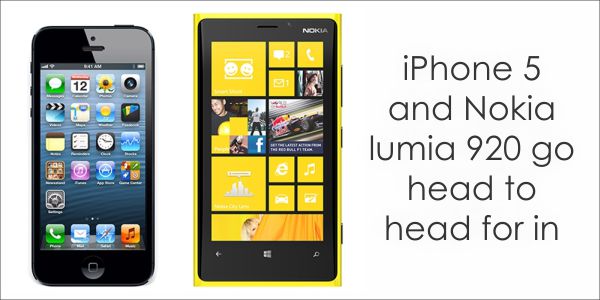 iPhone 5 features the same glass design with aluminum edges, instead of giving the ceramic back Apple decided to go two tone on their new phone., besides that – the aluminum design ensures “ruggedness” and without a doubt it will face the drops better than other phones, but we still don’t recommend carrying it without a case.

Next up is the Lumia 920, with the polycarbonate body and wide rounded edges really speak out of its “boldness” (which I honestly like). You can get Lumia in Yellow, red, white, black and grey colors, the metro UI really stands out with bold colors.

Winner: iPhone will ensure a safe, durable and classy design, but we have gotten a bit tired of the look it caught on since iPhone 4. Lumia however is eye catching, the UNI body design is really our cup of tea, so we go for the Lumia 920.

Let’s talk display, ever since the launch of iPhone 4 – apple had been the king of displays with their “retina”, high pixel density display. The new iPhone has a 4” screen which is protected by corning gorilla glass and olephobic surface, 640 x 1136 screen resolution and 326 pixel density. The results are exceptionally clear, but the pixel density went down from the original iPhone due to increase in display size.

Lumia on the other hand boasts a 4.5” screen with 768 x 1280 HD display, it is protected by corning gorilla glass and the graphics are powered by something Nokia calls “PureMotion HD Display”. Furthermore pixel density of 332 pixels per inch gives it an edge over iPhone 5.

When iPhone 4s came out, It impressed us with high quality images, so its no surprise that we expected the same from iPhone 5 – and yes it delivers. With the new hardware also supporting panorama functionality it is cherry on the icing. The rear camera is an 8 megapixel camera boasting resolution of 3264×2448 pixels and a front 1.3mp HD camera.

Lumia on the other hand has an 8 mp shooter as well, it also comes with PureView branding, meaning that it was built up with intentions to be the “best” camera phone, while others add it as a secondary feature, at the front there is a 1.3 megapixel camera as well.

Siri voice assistant is the name that pops up when we talk about “Voice assistants”, although Google Now is doing well with its voice assistant features – Samsung decided to stick with S-Voice, which sadly is lagging behind.

Windows 8 incorporated TellMe voice assistant, it will allow developers to place their own commands.

Both the devices under consideration feature LTE connectivity, Apple still has some catching up to do and Nokia had introduced LTE a long time ago, but the data transfer rates on iPhone are much faster.

Let’s take a look at technical specifications of the phones. 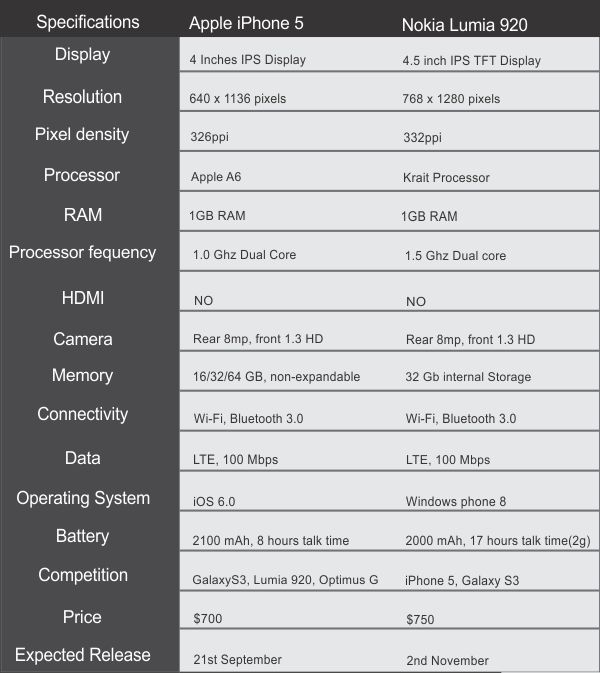 The phones are top contenders and have the most appealing features, while the iPhone will deliver a top notch quality phone, Nokia will spice up your phone lineup. The stealing features definitely are the camera, the processor, display and design. However, when it comes to the operating system; and of you like to have have more options on the App store then iPhone should be your option. The reason being that iOS is overall more popular than windows phone and gets a better support.

In the end we can only suggest, rest remains upto the users.