Earlier today Mozilla updated the line of its browser by releasing version 15 for both Android handheld devices and desktops. The browser war always had featured Chrome and Firefox being in spotlight. So we thought why not test Firefox and chrome head to head (for phones) and see which one performs better and has better plugin options and value. 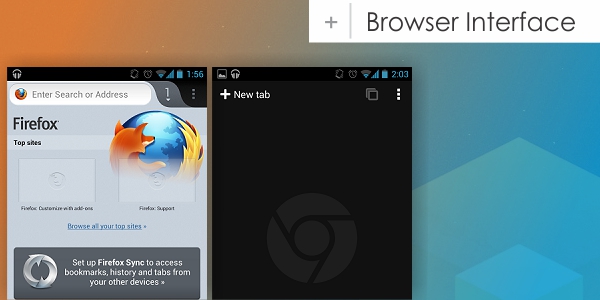 First of all we shall cover the interface, the most important aspect in my opinion. As we all know Google usually opts for a more of a minimal interface which requires least amount of interaction. Firefox on their previous iterations offered more of a “heavy” interface with big buttons and sidebars, things have changed in Firefox now though. The sidebar that covered half of the screen before is now replaced with a drop down menu which lists several options, among those a “share” option is present – you can use it to share the pages on twitter, Facebook or blogs, a nice feature. While on the other hand Chrome has always had that minimal interface.
In the battle off Firefox has improved from previous iterations, the tab bar is better and the search options are friendly as well, but the fact remains that it is still easier to browse through via chrome. Creating new tabs and closing tabs with swipe gesture is available on chrome which in my opinion every browser should have. So as far as the interface goes chrome gets the win here. 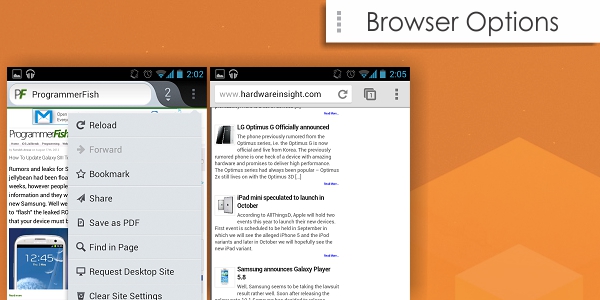 Plug-ins, browsing options and other features are what we are talking about. Firefox has always been a “King” when it comes to plugins and features; they have maintained their integrity and the plugins are one click away from the homepage. Apart from that you can sync the tabs of your desktop version of Firefox and bookmarks as well now. The story is same when it comes to chrome; you can access all the data off from your desktop version via your Google account. All is good for Firefox in this area. With silent background updates and fully customized for HTML5 it gives chrome a tough run.
Google chrome competes thoroughly and comes at the same level in features, though plugins is the area where chrome is lacking at the moment – but it is not a major issue but still due to that factor Firefox wins the round.

For performance test we will conduct a few benchmark tests. Sun spider, HTML5 speed test and Acid 3 test will be carried out to test the performance. A GSM version of Galaxy nexus on Wi-Fi network will be used to test the speeds. First of all let’s start with Sun spider test. A sun spider test will determine how fast a page loads on a web browser, it computes the times meanwhile taking in account 3D aspects and the time taken to lead the scripts. Let’s check the out the results for the browsers.

note that the left screen is firefox browser, right meanwhile is chrome. 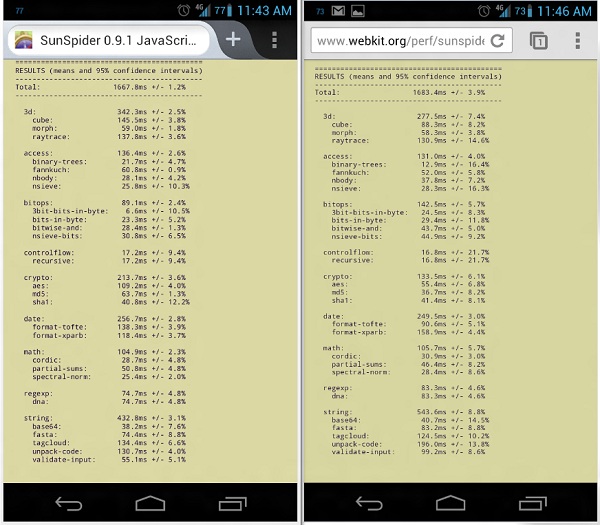 On the sun spider test, Firefox scored 1667.1 ms meanwhile chrome managed to pass the test in 1668.4 ms, which greater than that of Firefox. This means that Firefox will load simpler pages better. But when it comes to more detailed pages and 3D objects Firefox completed in 344 ms meanwhile Chrome in 240 ms.

Acid3 test measures how well a browser follows the standards of web or w3c rules. Again the test was made on Galaxy nexus better the result more accurate will be the result. The webpages will display better and perform better. Let’s carry out the test.
Google Chrome scored 100%; meanwhile Firefox managed a close 99%. This means that chrome will deliver better results than Firefox. And finally the HTML5 test will determine which delivers HTML5 better. 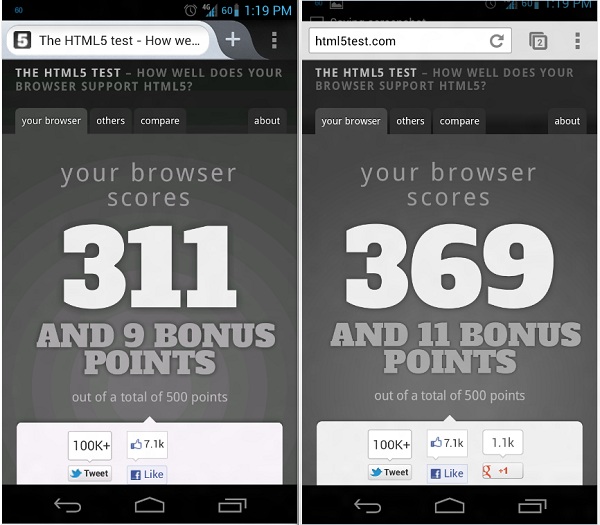 The Google Chrome turned out to be a clear winner in the HTML5 test, while Firefox secured the sun spider test with a margin of just one ms. So overall Google chrome is a clear winner, but we have to consider that Firefox put up an amazing fight and came very close at occasions. The thing that is in favor of Firefox is the compatibility. While chrome is supported only by ICS and above, Firefox will operate on froyo and above. This compatibility issue is the only thing that might affect the desirability of chrome. Benchmarks are fun and they give you a clear view, but the truth is that both the browsers perform well and I would use any of the two, both are minimal both have good speeds and interface so it is just a matter of choice.