AMD is back with announcement of Z-Series APU and say that it packs a lot of power. Accelerated processing units are used to give a boost to the hardware wither be CPU’s or GPU’s. There are several variations to the device, a variation in which the APU is described as a processing device which integrates a CPU and an OpenCL compatible GPU on the same die thus improving and accelerating data performance rates and power consumption up to 50%. So, overall APU’s have tremendous capabilities and can provide that ‘extra punch’ to the system.

The Z-60 is their latest addition to the lineup in the performance PC market. The company said in a press conference that it will support windows 8 apps and user interface, not to be left out; it is also back compatible with windows 7. Being 10 millimeters thin, the APU delivers extreme performance and takes up very little power.

AMD will start rolling out the APU’s as windows 8 gets official, while certainly powerful and capable enough to tackle big computers, AMD suggests that it is aimed to fill a void in the market, yes, the Tablet market.

“We see a large gap between the lower performance and high-price competitive offerings that allow AMD to be in tablet designs that will please our customers and end users alike.”

Performance wise the Z-60 is designed to enhance the tablet experience, providing instant boots and resumes from sleeps and all in while enhancing the battery life. The APU will be clocked at 1GHz powered by 2 CPU cores and 80 AMD Radeon cores. The chip also supports Direct X11 and HDMI output. Coming back to battery life, here is a chart released by AMD revealing its performance under different conditions: 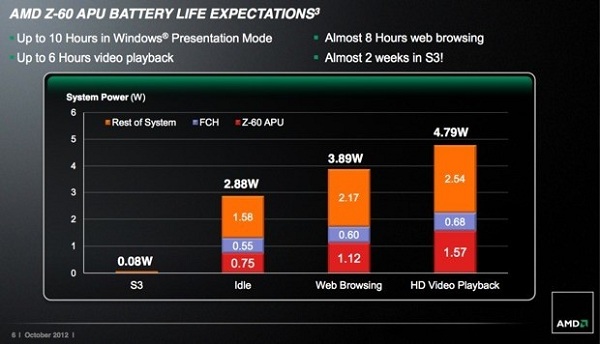