Acer Updates it’s chrome book, bumps up hard disk space and RAM, yours for $300; But does it make sense?

Acer revealed a couple of months ago the chrome book C7, by no means it was perfect but with a price tag of $199 it was the months deal. However, ACER thought that it wasn’t good enough and after just a few months they have decided that the book needed an upgrade. We did review the C7 at Hardwareinsight, and to be honest we quite liked it and even suggested it over the Samsung’s chrome book, it was pretty good netbook overall which makes us think if the upgrade was really necessary. Anyways, we can’t really say NO to a new gadget, so lets take a look inside and see what changes has ACER made. 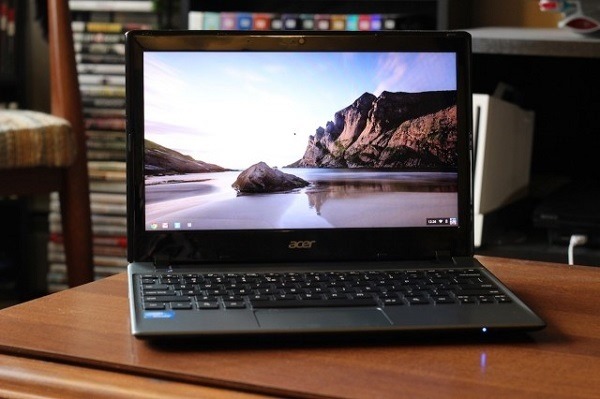 The original C7 used intel dual core processor clocked at 1.1 Ghz, boosted 2GB of RAM and for storage it used 320GB 5400RPM hard disk which was a major improvement over 16 GB samsung’s memory, but, Samsung gave us SSD which is faster and more efficient and when it comes to webOS, that really is the point. Yes, the Acer C7 can be suggested as a replacement for the aspire one but Chrome OS cannot be treated as a replacement for windows can it? So now you must be wondering what sort of upgrades did Acer manage to pull off, as it turn’s out, battery was one of their main concerns and now the C7 can manage around 6 hours of use with contrast to 4 hours of battery life with the old model.

The new chromebook also offer bump in memory, instead of 2Gb RAM you will be getting 4GB DDRIII RAM and a 500GB hard disk instead of 320 GB hard disk, that is a lot for a netbook that relies on the web. It all seems a fairy tale, but do not set your heart on it till you hear the price, it is $300. Yes, Acer has bumped up the specifications, but increasing the price by $100 seems a little too much for a chrome book, reason simply is the operating system and I for one would not pay $300 for a Chrome book, it is defeating it’s own purpose.

The original C7 made sense, you were paying $199 for a net book which would get you through the day’s work without a hitch and without denting your pocket. It offered the specifications which would run the minimal Chrome OS with ease, and that is the point of Chrome OS, the fact that it dosen’t need all the fancy overpowered RAM and extra hard disk makes it sensible, but by adding extra RAM and extra memory ACER is looking past the consumer needs and trying to find a better replacement for the Aspire ONE lineup. I am sure that with time developers will somehow  be able to run other more productive OS on it, but if you are on the old C7 and looking for an upgrade then our advice is to stay clear from the new C7 and will much rather suggest the Travelmate B113.