Acer Iconia A110 gets officially announced – set to challenge nexus 7

The Acer Iconia had been in the rumor mill for quite a long time now, we were aware that it would be launched to challenge the nexus 7, Acer has officially announced the tablet which is offering a resolution of 1024 x 600, quad core NVIDIA Tegra 3 processor powers the device and boasting 1GB of RAM.

The tablet sports 8GB of internal memory, and one feature that outshines from the Nexus 7 i.e. the expandable memory option. The display could have been a little better; Nexus 7 has a 1280p IPS display which produces very sharp display results.

The microSD can boost up the memory to 32GB – this might blow the Nexus 7 16GB option out of the woods considering it costs $199, and since both are offering jellybean out of the box – it could become a difficult choice. A micro HDMI connector gives the Acer an upper hand over the Kindle Fire HD and Kobo tablets which are in the same price range.

Iconia A1100 will be launched with a price tag of £179, which is greater than the 8Gb £159 Nexus 7, but is the inclusion of microSD enough for you to consider Iconia over the Nexus 7? I guess we would only know after it becomes available in first week of October and as benchmarks pour in. 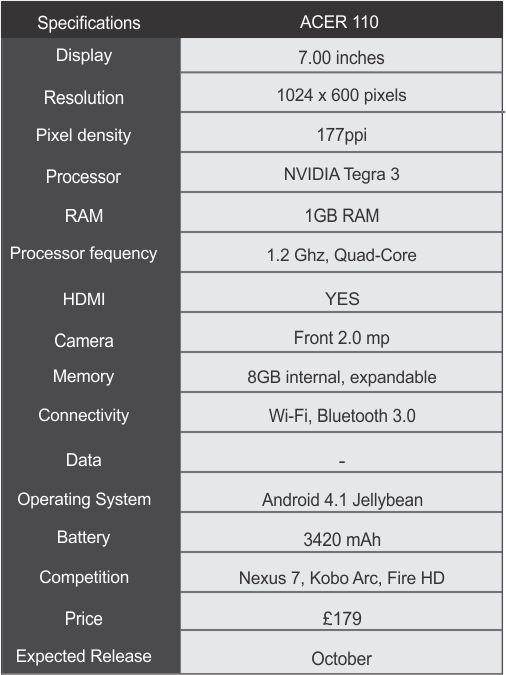