So, since we know a bucket full of tablets were announced recently by manufacturers like amazon, kobo, Google, ArchOS, Samsung and even by Lenovo. We want to find out which are the best. For now we are going to focus our attention on the e-readers i.e. which tablets are best for viewing books, news and websites. Our top pics are as following:

These three contenders will battle off in the 7 inch department, we will do a side by side comparison of specifications, dimension and hardware technicalities to list the best device. Pros and Cons will let you decide which tablet is the best for your needs.

Let’s start off  with design, moving on to other hardware specifications and prices they are being offered at.

All of the devices look absolutely gorgeous, starting off with Nexus 7 it has a 7” display and the good part is that it covers most part of the device at the front, apart from screen ASUS hasn’t bothered to waste space. Coming on to back side of the device – it has a rubberized back which is very comfortable to use and provides extra grip. Nexus 7 weighs 340 grams and has corning gorilla glass to protect that beautiful screen. Overall device is measured at 198.5 x 120 x 10.5 mm which makes it ultra-portable.

Next up is the Kindle fire HD, again it has a beautiful screen but the bad part is that screen does not cover the front side majorly, borders left out at each corners make it a little bulky when compared to nexus 7. The good thing is that it is fitted with Dolby surround sound speakers which produces amazing sound. Measured at 193 mm x 137 mm x 10.3 mm it scores slightly better than the nexus 7 but weighs a little more at 395 grams. Overall built seems great, but rubberized back of nexus 7 was an added plus.

And finally the Kobo Arc, design is very minimal (just like their website design) measured at 120mm X 12.4mm x 189mm it is thinnest of them all, the design is very “classy” and comes in matt finish, matt is good – means that you can play a little rough with it (although not advised) the overall constructions and the weight of 360 grams leaves it at par with the Nexus 7.

Round winner is the Nexus 7, and the comparison shows that we are not biased towards the devices, the corning gorilla glass and the weight of Nexus wins. Arc grabs the spot when it comes to overall dimensions of the devices, it’s the thinnest and the most petite. Kindle Fire came close to all specifications but did not manage to steal the spotlight. Nexus 7 grabs 9, Arc 8.5 and amazon 8.3 in the design round.

Next up for challenge is the display, all of them have gorgeous 7” displays with different aspect ratios. Let’s take a look one by one starting one by one – first up the Nexus 7 has a resolution of 800 x 1280 with a pixel density of ~216 ppi. The viewing angles however can be a little disappointing sometimes, to power up the display it sports LED-backlit IPS LCD capacitive touchscreen which in normal circumstances excellent to look at.

Amazon Kindle Fire HD has a resolution of 1280 x 800 as well which has almost the same ppi as the nexus 7. Corning gorilla glass however is missing from the specifications. And like the Nexus 7 it uses IPS technology capacitive touch screen.

Kobo arc is the third contender with the same resolution of 1280 x 800 but with slightly less pixel density of 215 ppi which leaves it behind the Nexus 7 but ahead of amazon kindle which has 213 ppi. Again the LED-IPS backlight display powers it up.

We can’t really define a winner since the results were so close so we give all the devices a score of 9 out of 10 in display category.

Memory is a very important aspect when choosing a Tablet, Nexus 7 has built in storage options of either 8GB or 16GB which is very limited, the amazon Kindle Fire HD offers 16GB or 32 GB internal memory and finally the kobo offers 8Gb or 16GB models like the Nexus 7, with the lack of SD card options in all of the devices.

RAM essentially will define how the device will perform when pushed to its limits with multitasking. Nexus 7 offers its users 1GB RAM meanwhile kobo and amazon are offering the same package.

Kindle finally hits the spot, although no expandable memory options are available, but slight greater internal memory of 16 and 32 GB gives it the lead in memory.

Everyone like to take random snaps, and considering the size of these devices – it is not hard taking them out and taking a few either. Let’s see what they have to offer. Nexus 7 will give you a front facing 1.2 megapixel 720p camera, meanwhile amazon and kobo offering 1.2 720p front facing camera’s only. Which gives them 9 points each, 1 minus for not having a rear camera.

Finally let’s come to the juice. Nexus 7 is powered by a NVIDIA Tegra 3 processor which is clocked at 1.3 GHz – mind you Tegra 3 are quad core processors and from what we have seen it is a monstrous device, developers are already achieving a quadrant score of greater than 8000 on the Nexus 7 by overclocking it. Amazon kindle will give you Dual-core, 1.2GHz OMAP4460 processor which although is a tough competitor but doesn’t come near the the Quad core monster.

Finally the Kobo is powered by 1.5 GHz dual core processor; 1 GB RAM, further specifications are not listed on their website, but it lands it above the kindle fire HD again just because it is clockes at a higher rate.

For small devices it is crucial that they perform well in the battery department, let’s start off with nexus 7 which offers a battery time of 10 hours, amazon promises 11 hours and finally the kobo suggests that their device will last 2 weeks on standby while offering 10 hours of continuous usage. Which gives the devices a score of 9, 10s and 9 respectively.

Nexus 7 was the first device to ship with Android 4.1 Jellybean and considering that it is a Google device you will get constant updates without a hitch. The kindle Fire HD have its roots from ICS meanwhile Kobo offers stock ICS as well. However since they are not “Pure Google” devices – updates might get delayed depending upon the respective manufacturers. Nexus 7 gets a 10 in OS battle meanwhile 9 offered to both kobo and amazon.

And the last thing we need to discuss before we can decide who won between them is the factor of pricing and availability. Nexus 7 is offered at $199 and $250 for 8 and 16 GB models respectively and is available in US, UK, Canada, Australia, France, Italy and Germany through their Google stores and internationally available through local retailers. Amazon kindle Fire HD will start shipping on September 14th with a price tag of $199 and $249 for 16 and 32GB models respectively. Meanwhile Kobo lands in the same territory offering their device for $199 for 8GB model and $249 for 16GB model. As far as value for money goes they all score a perfect 10. While Nexus 7 lacks behind in memory it covers up in other hardware, in our minds and opinion it still remains the leader – but before we can make any statements let’s evaluate the final score. Nexus 7 scores a total of 9.3, amazon kindle fire HD scores 9.0 and finally the kobo lands in at 9.0 as well. 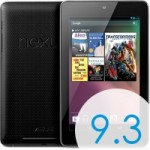 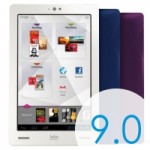 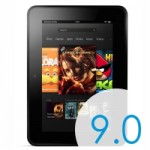 So Nexus 7 still hailed as a King of the budget tablets, with a faster processor and a better support it should be your first choice. Kobo and amazon are not far behind, if you want a little change than they are amazing options.