Blackberry World: 3 new devices claim to be successors to the Curve, Bold and Torch

The Blackberry World event scheduled on 1st May 2011 was long being awaited so we could see RIM’s game plan, sadly there may not be any surprises this year as leaked images pretty much tells the story. There are three new devices:

This device is the successor to the Blackberry Curve 3G, what’s new this time around is the rumored touchscreen.Also being codenamed the Blackberry Orlando it will support the new Blackberry OS 6.1 which also came into the limelight as these new devices were shown on camera. Other potential names for this device include Apollo and Sedona. [Source]

Codenamed the Blackberry Dakota rumored device will offer a touch screen and a physical keyboard, it will also run Blackberry OS 6.1 but sadly it may have the same lousy camera as that on the current Bold 9780, instead the 5 Mega pixel camera will feature HD video recording. it’s interesting to see however that this device appears to be a fusion between the Bold 9000 and the Bold 97XX, it features a bezel round its edge just like the first ever Bold Smartphone. The good news is it will now have a 1.2 GHz processor as well as a better display. [Source] 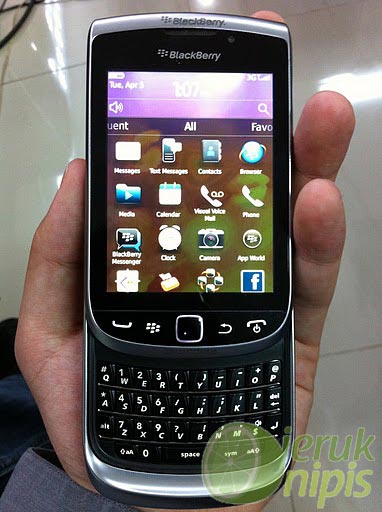 The torch may get similar upgrades as the rest of the Smartphones but it still appears to have a 5 Mega pixel camera. It also features a new shiny silver battery door which does give it a more feminine look. [Source]

We hope to have all these questions answered at the May 1st event, we’ll be covering it too and you can trust us to bring you the latest info, stay tuned!