We have been waiting for this game for nearly 4 years now. And I must say that Crytek really have outdone themselves.  They have made a game where everything just fits. And I certainly won’t be putting this game down for quite some time.

Let’s start with single player. The game plays a lot like Call of Duty (although in my view Crysis2 really is the superior game) and the controls are relatively the same as any other shooter. The campaign is set in New York City in 2023, which has been evacuated because of an alien invasion. The developers have done a great job of making a place which is so familiar to us feel so alien and otherworldly like seeing bits of Lady Liberty scattered round ruined streets from watching an alien gunship been blown to pieces right above the city.

Players take control of a Marine named “Alcatraz”, who gains the Nanosuit 2.0 in the first stages of the campaign. The Nanasuit 2.0 provides players with more customisation, letting you upgrade certain aspects of your suit and providing you with a more in-depth view of your surroundings. The suit has 3 different modesall of which run on energy; Stealth, Power and Armour. Stealth provides players with a cloaking ability that can allow them to slip past enemies. Be careful not to fire your weapon while in stealth mode or you will lose all of your energy and become visible to the enemy. Power allows players to jump higher; run faster; slide past enemies or under obstacles and you can air stomp while in mid-air which deals damage to players near the stomp. Armour allows players to take less damage from incoming bullets or explosions. It also allows them to take less fall damage. 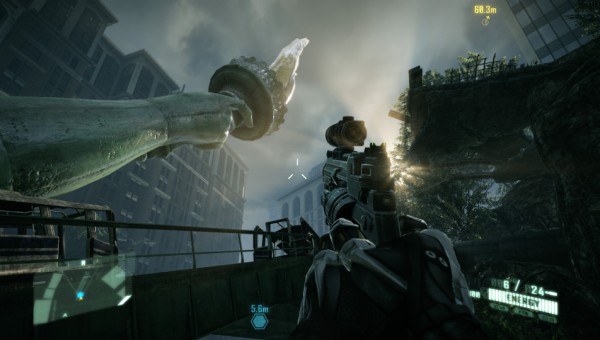 Single player is also a lot more challenging than other games out there. For example, players don’t start with a huge stockpile of ammo. Instead they are provided with a reasonable amount which could easily run out if the player is reckless. This means that players have to think about whether to engage in combat straight away or whether to find an ammo cache before attacking. Or you could always just sneak past them…..

Crytek have stepped away from the dull, monotone games like Killzone and Black ops, which we have been seeing for the past few years and have set the game ablaze with an abundance of colour. I find myself simply standing looking around me for a few moments watching the light bounce of buildings and cars while at the same time basking in the beauty of the urban jungle which has been created.

No more cut scenes! Crytek have replaced cut scenes with a more player orientated way to tell the story. Throughout most of the game the camera never moves from its original 1st person position and during important moments you are encouraged to press the ‘look’ button to have a look at the action. You do not need to do this if you don’t want to though. However, I advise you to do so. There’s nothing more gripping than watching FDR drive falling to pieces or a huge alien bursting through into Grand Central Station.

The campaign however is not that gripping. There are many things left unanswered and plot holes in the story seem to have been filled in with some fast talking 30 second loading screen between each mission which makes you feel like you’re just being shoved along. Console players have also been complaining about lots of AI bugs such asenemies continuously walking into walks or some ignoring you completely. 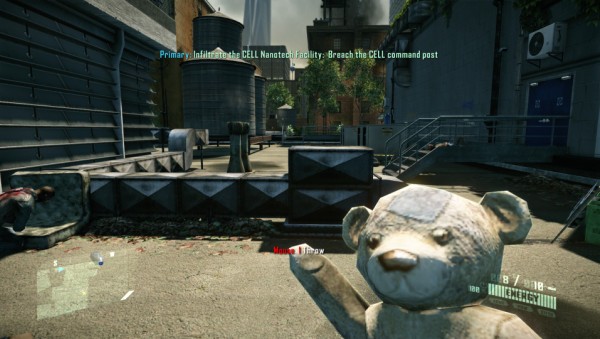 Players who have purchased the PC version will be greatly impressed, although it does suffer from some bugs but not as many as the console versions. I however have not experienced such problems. These however are very insignificant problems when you look at the game as a whole. The PC version has also been praised for its vastly superior graphics over the consoles. Console versions have also been suffering from low framerate and graphical issues. I must say I am glad I purchased it for PC!

Online gameplay is where this game really kicks off though. With the combination of the Nanosuit and addictive gameplay you will find yourself in a completely unique online experience even though it has a similar progression to the Call of Duty franchise. Players can upgrade their suits with different abilities and unlock new weapons and attachments. While the customisation levels are not as huge as Call of Duty they are still reasonable and provide some unique moments. My favourite attachment is the hologram which is a projection of yourself that is fired from your gun and runs into the enemy making them shoot it therefore unveiling their hiding spots.

The thing I like about the multiplayer is the balance that Crytek has achieved between the player and the Nanosuit. Players can’t simply activate armour, run in and then kill everyone without even taking damage. Players must plan out their attacks before engaging. Activating you cloak while in open space and then taking it off when in cover is an excellent way to sneak about and get those lucrative stealth kills. With this perfect balance players actually require more skill that you may think. There is a variety of different gameplay modes. Capture the Relay, Team instant action and more. All which will let you discover new ways in which to use your suit.

With almost nothing to complain about this game provides players with an explosive and vibrant single player mode and offers a multiplayer experience like no other. Succeeding in almost every aspect this game will surely be a contender for the game of the year. Also, if you really want to experience the game to its fullest… buys it on PC (that is if you have a rig that will run it)