Advanced technologies have made is so easier to spy and monitor your Home/ Office in an imperceptible manner. There are dozens of spying tools that give you quality surveillance at a reasonable price.  When the most ordinary and simple home / office devices are integrated with state of the art technologies, it barely leaves any chance of making the spying process noticeable. You can be the master of your home and office surveillance with these devices, and can always keep an eye on happenings when you are not around.

Brick house security offers you with the best and most reliable surveillance and security devices at reasonable prices. They have dozens of house hold items concealed with high resolution spy cameras possessing applications beyond your imagination. These spy cameras are best source of finding the truth. Find, if your companion are running behind your back, or if you want keep an eye on your kids when you are off to supermarket, monitoring your employees productivity during the office hours, finding the real faces of people when you are not around, all the conspiracies and plans behind your back and several other applications that you can easily monitor by deploying these device at your home and office. These devices are also best for those people who can’t manage huge finance for some security company services, and also for those people who like to do things themselves.

Camera in a Smoke Detector

Helping the same purpose Brick home security offers an amazing smoke detector which is capable of doing things beyond your imagination. Did it ever occur to you that in your home or office the smoke detector on top of your head could serve as high resolution spy camera? …Probably not. 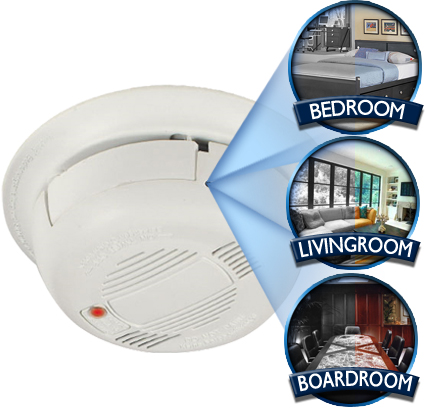 Just like an ordinary smoke detector you have to mount the device and it is all set for high quality surveillance. The device comes up with a built-in DVR which supports removable SD card up to 4 GB, enabling video recording in digital format on the SD card which you can easily monitor on your computer.

Spy Camera in a Table Clock

Another such wonderful device to monitor you home and office security is ishot hidden camera; a motion activated video camera concealed in an ordinary table clock. The clock supports SD card which can be upgraded up to 16 GB, enabling it to monitor video up to 24 hours.

The device needs no complicated setup; all you have to do is put 4 AAA batteries and place it at a suitable location, adjust the camera at a desired angle and press the oval button on its top. If you are planning for a longer video recording then you can also plug in a power adapter. You can take the SD card out and watch the taped videos and pictures on your cell phone and computer.

Try these devices and get all the facts and evidences that you need, and be the master of spying.