Manchester airport security has given its first shot to a naked scanner. Authorities claim that this will accelerate the security checks by scanning every little thing that the passenger is carrying with him. The images will be destroyed straight away, say the authorities.

The scanner generates a black and white image of the human body including their body piercing, breast enlargement, and person’s genitals. Hence it’s a complete naked show of passenger. Currently the scanner has been installed at the terminal 2 of Manchester airport. Sarah Barrett, head of customer experience at the airport, said “most passengers did not like the traditional ‘pat down’ search.” The authorities also claim that these images would be destroyed immediately after the scanning.

The pros are that the authorities would get a complete access to any explosive, armor or some other dangerous equipments a person is carrying with himself, and in terms of security this would be in the best interest of general public as passengers will no longer have to take off their shoes, coats or other out fits and they can save plenty of their time. 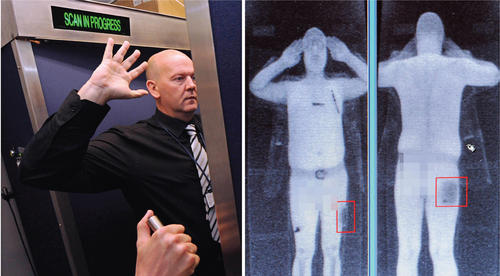 Still the cons can’t be neglected, most of the people aren’t comfortable with authorities having a complete naked display of them and besides this is a real invasion of our last privacies. Some guy having a naked picture of us! People would quite hesitate trusting these big authorities for handling their naked pictures. People are calling it huge violation, and unacceptable act, misuse of power and who knows if these pictures are trafficked.

The scanners cost £80,000 each. They are fixed in booths and they will generate virtual three dimensional image using beam of electromagnetic waves. Ms Barrett said the radiation levels are “super safe”. She said: “Passengers can go through this machine 5,000 times a year each without worrying. The amount of radiation transmitted is tiny.” Authorities will decide whether to install them permanently in about a year’s time.