The dust of iPad hasn’t settled down and Apple is playing the next big card. Apple is planning for the personalized mobile advertising which might be called iAd. The name is a little silly, but consumers will absorb it. iAd will be providing targeted, location-based ads. Apple might release iAd on 7th April. Nothing has been officially confirmed, and as ever apple isn’t answering the queries made by the press. 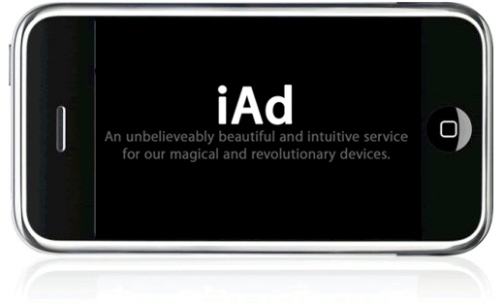 Recently, apple bought a mobile advertising firm Quattro for $275 million, which confirms that Apple wants to jump in for the mobile ads. Responding to the company’s acquisitions of Quattro and the Lala music service, Apple’s chief financial officer Peter Openheimer said:

In terms of Quattro and Lala we acquired Quattro because we wanted to offer a seamless way for developers to make more money on their apps, especially free apps. We acquire companies from time to time for their technology and talent, that’s why we do it.

Also, Apple registered for in 2008 that it can potentially control ads served on virtually any screen connected to an operating system that would turn the content or application off if the user isn’t paying attention to the ads. The new personalized ad has been described as “revolutionary” and “apples next big thing” by Steve Jobs (via MediaPost)

Apple is expanding its business developing substantial software’s. According to the Interpublic’s Magna forecast the mobile ad spending is $331 million and is expected to reach $409 million by 2011. But there isn’t a single organizing principle for agencies and advertisers to rally around.

Everyone will be following this very closely,” says Josh Lovison, the mobile lead at Interpublic’s Emerging Media Lab, adding: “Given the way that Apple is able to package things up, with very slick presentations, it will be interesting to see what they do with that advertising.

The iAd development will put Apple straight against the Google who has acquired Ad mob for $750 million. I hope apple doesn’t get too distracted by their battle against Google. Advertisements are annoying most of the time, hoping Apple could come up with customized ads that consumers are willing to absorb. We have to wait and see how the mobile ad industry welcomes iAd.