So you have Apple’s 13-inch MacBook Pro and your wrists hurt ever since you started using it? You won’t need a Sherlock Holmes to prove the connection between your wrist pain and your new MacBook. The sharp edge of the Apple MacBook Pro had caught everyone by surprise. Apple, of late, has been on top of its game which made it even more surprising to see Apple make such a basic flaw in the design of the 13-inch MacBook Pro. 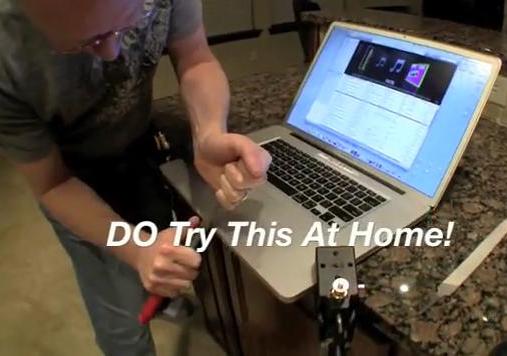 The Aluminium casing of the MacBook has an edge at the exact location where your forearm must rest; the edge is so sharp that it could cut an apple into two, if it fell directly on the edge, from a high enough location. Aluminium is a light but,also, a very strong metal. It does not rust under normal conditions, which happens to be the precise reason why it is used in aircrafts. The good news is that it is easy workable. That is to say that Aluminium can be easily sheared.

So, to get rid of that sharp edge on your MacBook just go to the market and buy two metal files, one of which should be coarse and the other for fine filing. You should also buy two clamps to keep your MacBook in place when filing. Place your MacBook at height just above your waist; now clamp it to the surface that you’ve put it on. Firstly, use the coarse file; this is the one with bigger boxes on the surface. Now, you should be able to see the material removal process. As you rub to and fro with the file, on the surface of the Aluminium edge of you MacBook the edge will start to vanish and a new face will be formed therein. Now using your fine file, slowly start smoothing the surface of the worked edge of your MacBook. With the fine file you should be able to give curvature to the Aluminium face formed by the coarse file. The last step is to remove the burr from the finished face.

Through the simple steps explained above you’ll have your MacBook the way it should’ve been in the first place. Let’s just hope that the Apple people don’t err again in their next MacBook. [via tuaw]